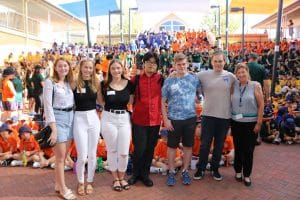 Our College Assembly on Wednesday was a community celebration in which we welcomed new students and staff to the College. Our prayer focused on Dom Rosendo Salvado on whom we will have a special focus this year,  Salvado represents the Enrichment Pillar for our College and the values of gratitude and stewardship.  In Salvado’s life as he lived out the Gospel calling he lived out these values.

We also acknowledged staff taking on new roles this year :
Mr Shelton – Deputy Principal (Learning)
Ms Keating – Learning Innovator
Ms Dunstan – Learning Innovator
Mr Hughes and Ms Rafferty– Middle School Innovators
It is a tradition at our opening assembly to invite back high achievers from our graduating class.  We congratulated Meagan Jones, our College Dux for 2018 received an excellent ATAR score of 96 and also received a Certificate of Distinction from the School Curriculum and Standards Authority for outstanding levels of achievement in the WA Certificate of Education. Meagan has been accepted into Law at the University of Western Australia with a direct pathway into the Masters programme as a result of her excellent results.
We  also congratulated the following students who received an ATAR score above 90:
In addition to these students the following students received Certificates from the School Curriculum and Standards Authority:
Students achieving a 90 plus ATAR will have their name inscribed on an honour board.
In addition to these individual student achievements, Holy Cross College was also recognised by the Standards and Curriculum Authority as being one of the highest achieving schools in WA in Religion and Life.
Our Graduating Class of 2018 did very well with 100% of General students achieved a Certificate II, III or IV, giving them a head start on vocational courses.  83% of students who applied for university received an offer for their first preference of courses and 96.2% received an offer form university in the first round of offers.
I congratulate the Class of 2018 for their results and wish them well for the next stage of their journey.
This is our 10th year as a College.  In 2010 we started the year with just 69 students and a small number of staff. We couldn’t have imagined then that in our tenth year we would be a Pre-Kindergarten to Year 12 College with over 1000 students and over 100 staff. Since that time we have embarked on significant building programmes.  We are about to open the St James Centre which is in the Santiago de Maria building.  This building is named for the Diocese of Santiago de Maria which in a poor region of El Salvador  and includes Ciudad Barrios, the town in which St Oscar Romero grew up.  Romero served as the Bishop of Santiago de Maria form 1974 – 1977.  Witnessing the suffering of the landless poor in Santiago de Maria strongly influenced Romero’s commitment to social justice.  The Cathedral in Santiago de Maria is called the Cathedral of St James the Apostle and it is from this we take the name of the St James Centre.  For Holy Cross, St James also has a link to the Camino de Santiago as the great cathedral in Santiago de Compostela is also called the Cathedral of St James.  The St James Centre at Holy Cross will include the Wellbeing Centre which will house our College Counsellor, Psychologist and Nurse, and also the College Staff area.  It is a beautiful facility and I look forward to us taking full occupation of it in the weeks to come.  The next facility we will be building will be a Sport Centre. The  building of this this will commence this year.
In this 10th year we will look back and we will look forward, but our young people live each day of the present time at Holy Cross College I hope they live life to the full. 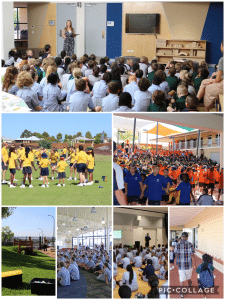