An Earworm is a catchy piece of music that continually repeats through a person’s mind after it is no longer playing. They can be fun, at least to begin with, but it can soon become annoying if they don’t go away. Advertisers know the power of earworms in the form of clever jingles that repeat and repeat, as if on endless replay.

When I was a lad a famous earworm that spread across the world came from Disney’s Mary Poppins – “Supercalifragilisticexpialidocious”.

Another notable earworm is “Who let the dogs out” by the Baha Men. This one annoys me greatly as I always finish it with “ruff ruff”. Kylie Minogue sowed the seeds of an earworm with her song “Can’t Get You Out Of My Head”, rather ironic really or maybe it is a deliberate part of writing hit songs. There are many others that include:

Earworms can be considered a valuable teaching tool and have been used for decades in the form of rhymes: Hickory Dickory Dock; Humpty Dumpty; Jack and Jill; Pat-a-cake, pat-a-cake; Row Row Your Boat; Hey Diddle Diddle the Cat and the Fiddle, and the list goes on and on and on . . .

An earworm that I particularly like is Paul Kelly’s “From Little Things Big Things Grow”. Over the past few weeks this earworm has been on constant replay in my head. Probably because I am so excited about the commencement of the Stage 6B building program, which includes the construction of the sports centre with two courts, gym, climbing wall and abseiling wall. From its small beginnings, the College has grown to an enrolment of more that 1,100 students from Pre-kindergarten to Year 12 with teaching and learning spaces that are the envy of many. We are so lucky – lucky lucky. Thanks Kylie!

The sports centre is scheduled to take around 40 weeks to complete and should be ready for the start of the 2021 school year. Earlier if we are lucky, lucky!

An interesting thing about Paul Kelly’s song “From Little Things Big Things Grow” is that, while many people sing the earworm, most people don’t know that the song is actually a ballad about justice for indigenous people. The song is based on the story of the Gurindji strike and Vincent Lingiari as part of the Indigenous Australian struggle for land rights and reconciliation. The song tells the story of the Wave Hill Walk-Off in 1966, through to Prime Minister Gough Whitlam symbolically handing their land back eight years later – an event which become a catalyst for the Aboriginal land rights movement. From a small local protest in the outback a national human rights movement grew and continues today. 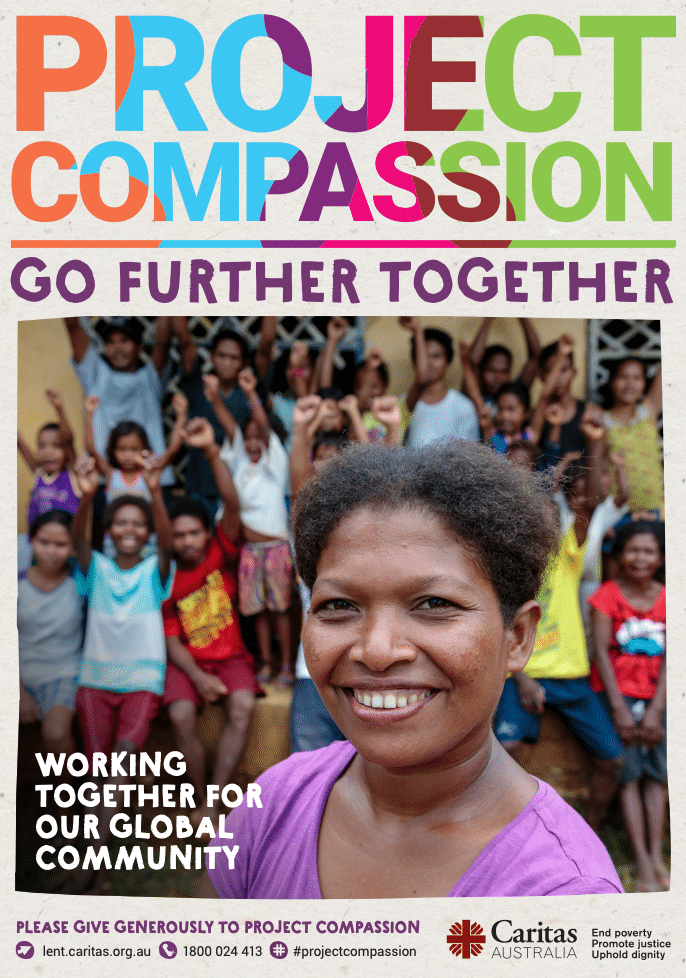 Paul Kelly’s tune also highlights how our own small actions and contributions can make big things happen. We celebrated Ash Wednesday this week to mark the beginning of Lent. Lent is a period in the Church’s calendar described as lasting for 40 days, in commemoration of the 40 days Jesus spent fasting in the desert during which he endured temptation by the devil. It is a time of physical and spiritual preparation leading up to Easter and Christ’s Resurrection. It is a time for penance, prayer and almsgiving.

Sr Frances McGuire, a Sister of Saint Joseph of the Sacred Heart, and friend of Sister Irene McCormack said, “Project Compassion is one of the vehicles for almsgiving in Australia, but we can give more than money. Time given to a sick or lonely person or to community service, emptying out an overcrowded wardrobe or even a crowded one – these are all ways of almsgiving. It could be making space in one’s heart for someone not liked very much or for the poor and suffering of the world, near and far. Perhaps this Lent, my call is to greater generosity of spirit.”

Perhaps too, this Lent, having Paul Kelly’s earworm stuck in our heads would be a good thing. All contributions to Project Compassion, big or small, can make an enormous difference to many people in need. So, I’ll finish this blog and leave you with Mr Kelly’s famous words: