The Executive Student Leaders attended the GRIP Leadership Conference on Monday. Ronan McGinniss the managing director of GRIP Leadership, used the word, “transform” as the basis and the theme for all the activities that followed throughout the day. This conference was both interactive and informative and reminded us all that leadership was not a battle, but rather something that we should all work together on. This was demonstrated to us in the first session through a game of noughts and crosses. The task was simple. Finish as many games as possible. For most of the thousand atttendees the first attempt was ineffective. Most only completed about 3-4 rounds. The GRIP team then reminded us that the goal was to play as many games as possible. This required us to stop competing against each other, but to work together. This time, most of the people in the crowd reached about 14-15 games in one minute. This demonstrated to us the importance of transforming team work.

After this quick session we were given a chance to mingle with not only other students but other schools, ranging from St Lukes College in Karratha to Swan Valley Anglican Community School. This was also a perfect opportunity to network and see what issues and problems were occurring in other places and how they dealt with them. To conclude the first session we were introduced to ‘Loud Noises’ which was provided as the entertainment for the day.

After the morning tea break, Session two and three allowed for us to attend some concurrent workshop electives.  These electives allowed us to focus on things in our school that might benefit us more as leaders. We elected to split into teams and proceeded to go to each different elective. Two of the first electives were ‘Transforming My Capacity’ and ‘Transforming Event Participation’. ‘My capacity’ discussed the challenges of having a heavy load and how to delegate tasks and take smaller workloads. Event Participation focussed on how to maximise participate in school events.

One of my highlights during the day was during the lunch break. I was lucky enough to have a discussion with the director of GRIP Leadership, Ronan McGinniss. In this discussion I asked Ronan, ‘what in your mind makes a good leader?’. His response was “focusing on others, rather than then your own interests, another thing is using your own talents and interests to put forward who you really are.” This was something that really resonated with me. Too many times you will see a leader change something for their own benefit, not for the benefits of others, and generally you will see a facade in a leader, where they will try to be someone or something they are not.

The day conluded with small networking activity, a Q and A with the GRIP team and one last “loud noises” intermission. This last Loud Noises session was particularly enjoyable as it was a dance off. 5 different schools were picked and then for a special treat, two teachers, one of which was our very own Mr Shelton (who had bust a move on stage).

Overall, it is fair to say that all of us as leaders now feel more wise. We also feel equiped to be a better leader than when we left in the morning. 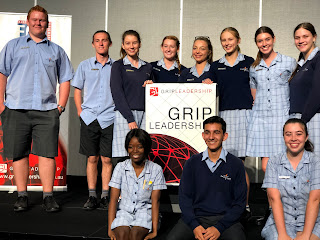