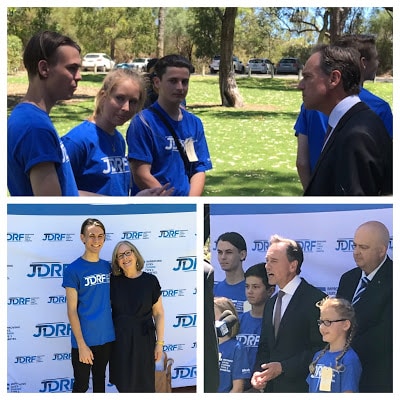 On Monday, 4 February 2019, Year 11 Holy Cross College
student, Logan Chilman, was involved in a life changing conference hosted by
the Juvenile Diabetes Research Foundation (JDRF). During the conference, Mr
Greg Hunt, Federal Minister for Health announced $54.5 million dollars is to be
spent on diabetes research over the next 5 years. Logan exclaimed, “words
cannot describe how happy I am and how this changes the lives of myself and
hundreds of thousands of other Australians dealing with type-one diabetes.
The fight for funds has been a long one. Since the age
of 4, Logan has personally advocated numerous times for different funds for
JDRF. In 2010, Logan and other advocates of JDRF travelled to the steps of Parliament
in Canberra to make insulin pumps affordable and accessible: Logan indicated
that “the delegation was successful and a step in the right direction”. But
this was only the beginning. Last year in August, JDRF advocates again walked
the steps of Parliament, with the goal for the government to commit $55 million
dollars to be spent on diabetes research over the next 5 years. The contingent
had one message; “research holds the key”, and this was made apparent to all
politicians in Canberra. After hearing their message both sides of Parliament
acted, committing funding of $54.5 million dollars towards diabetes research.
Logan’s involvement as an advocate in all this has
been hard, yet worthwhile. Early hours and non-stop talking, but Logan says “it
was all worth it to finally see the positive change that my work, and the work
of so many young advocates, has made to people living with type-one diabetes.
Logan hopes these funds are useful in finding better
treatments and possible prevention methods to type-one diabetes, as well as
make the lives of diabetic children and families easier. In the future, Logan
hopes to continue his support for JDRF in advocacy to further diabetes
awareness and help get closer to a cure. Logan is an inspiration to all members
of the Holy Cross College community and we wish him well in his future endeavours.
Mr Peter Collins
Vice Principal